Bernard Rhodes - the character behind our club

"I was 17 at the time, a bunch of us were messing around in sailing dinghies, all different, so I took the initiative and wrote to the RYA. I became the founding secretary. I have a few old photos, will have to dig them out."

So says Bernard in an e-mail received recently. At the age of seventeen, Bernard, on his own initiative, put up notices to call the meeting from which SWSC evolved. (See page 8)

Bernard's father was a boatbuilder and was the initial lessee of Fell Foot when it came into the hands of the National Trust. Bernard was, not surprisingly, always messing about in boats (see photo) and, be-

coming quickly disenchanted with life as a Vickers apprentice, Bernard designed and built at Fell Foot a boat, which his father, reputedly, declared to be unseaworthy.

Behind the casual statement that he sailed to NZ, what is his story?

Bernard took his completed boat to Roa Island where, as a wooden trimaran, it was regarded with some scepticism. In 1966 at the age of 23 he set off for Spain. This was a lesson in respecting the ocean after he was caught in a ferocious storm that tossed his trimaran like a cork and very nearly capsized it. 'It was a life altering moment,' he says. In the Canary Islands, he used his ingenuity to build a rudimentary self-steering device to allow him a few hours sleep at night. He flew across the trade winds making incredible time and crossed the Atlantic in under 20 days, smashing the singlehanded transatlantic record by four days. Eventually, he arrived in the Caribbean where he lived for some time on a dollar a day.

Continuing his quest he sailed through the Panama Canal to the Galapagos Islands and across the Southern Pacific. He island-hopped through the Marquises, Tahiti, Bora Bora, the Cook Islands and Fiji to Aotearoa, New Zealand, which was to become his home. He found temporary work on other boats and had plenty of time to savour the beauty of the islands, both alone and in the company of crew.

Despite his many idyllic moments, he also came close to danger. One day, dolphins woke him to alert him that he was about to hit land in the Galapagos, and in the Cook Islands he ran his trimaran onto a reef but was fortunate to be able to refloat and repair it. His 3 years exploring the world had been a character building experience. 'I had become a world citizen. I saw many ways of living and lived close to nature. I learned loneliness is in the mind, not a physical thing'.

In the early 1970's Bernard began hearing about the dangerous effects of French nuclear testing in Moruroa and other Pacific islands. Using donated money he joined a protest fleet of yachts to sail to Moruroa. His protest boat, The Fri, pressed into the danger zone and dared the French to test their nuclear bomb. They didn't. After 75 days at sea, The Fri retreated to Rarotonga to get more supplies. After restocking, The Fri headed back to Moruroa but was illegally arrested on the high seas by the French. They made life difficult for the French and went on hunger strike in protest. These events made international headlines, which was exactly what Bernard and the protesters wanted. Their actions spurred the New Zealand government to send a warship, The Canterbury, into the protest zone. The result of collective protest efforts was that the French stopped their testing for that year. They also stopped testing in the air and instead began testing underground.

Bernard has made other sailing trips around the South Pacific, often with his Japanese wife and two sons, and has continued to find new challenges and adventures in his unusual yet exhilarating life. What is his advice to young people considering sailing the world today? 'Go for it!'

Some of the above story is from Bernard himself and some from the website of Peaceboat, an organisation which Bernard supports and in which one of his sons has served. Peace Boat is a Japan-based international organization that works to promote peace, human rights, equal and sustainable development and respect for the environment. It carries out its main activities through a passenger ship that travels the world on peace voyages.

And finally Bernard says "Please give my best wishes for the Club's 50th birthday".

I hope you can now look at the photo of Klis in the clubhouse with greater understanding, inspired by the character behind the boat and our club. 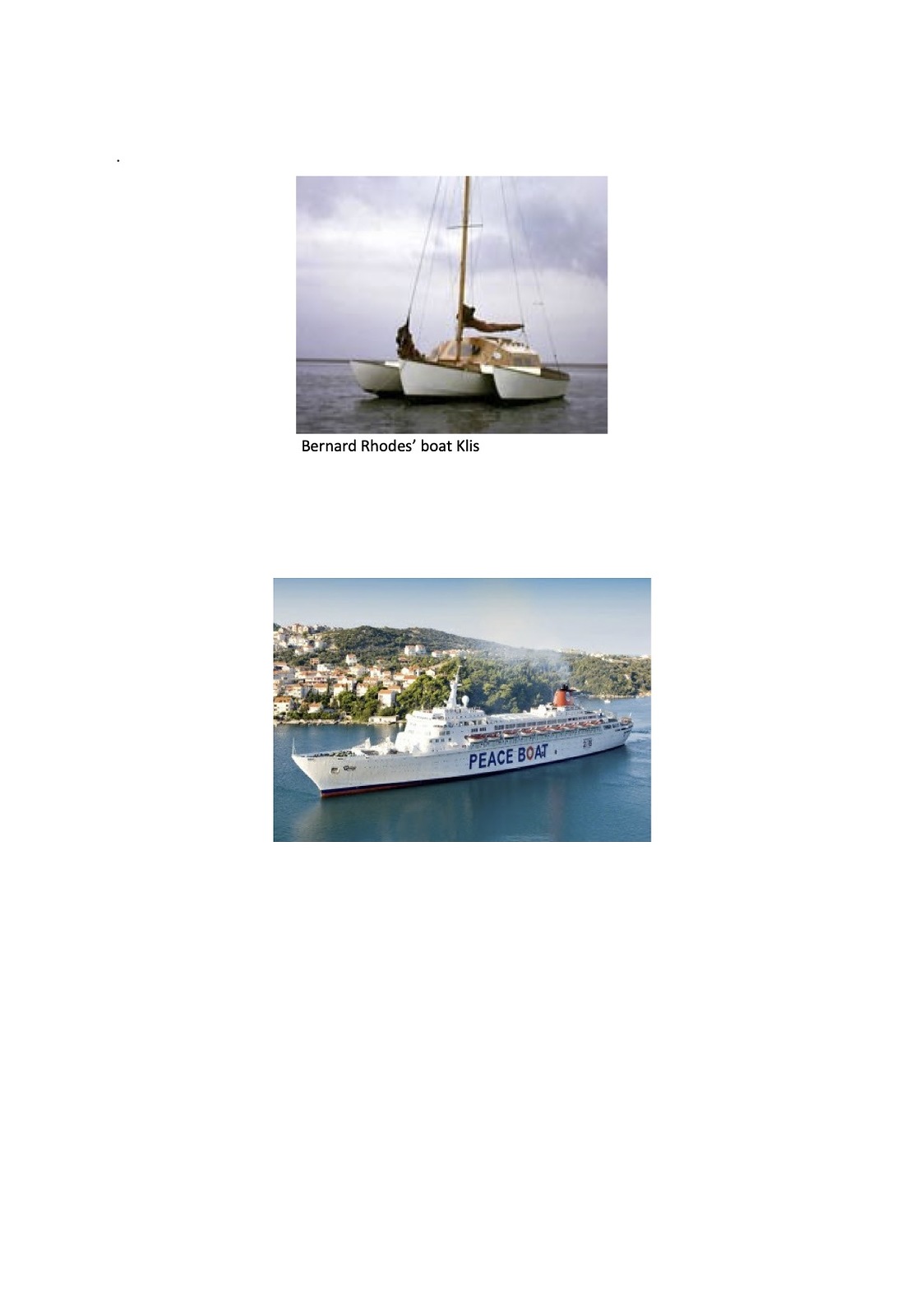