Anniversary Waterhead Race Enjoyed by All 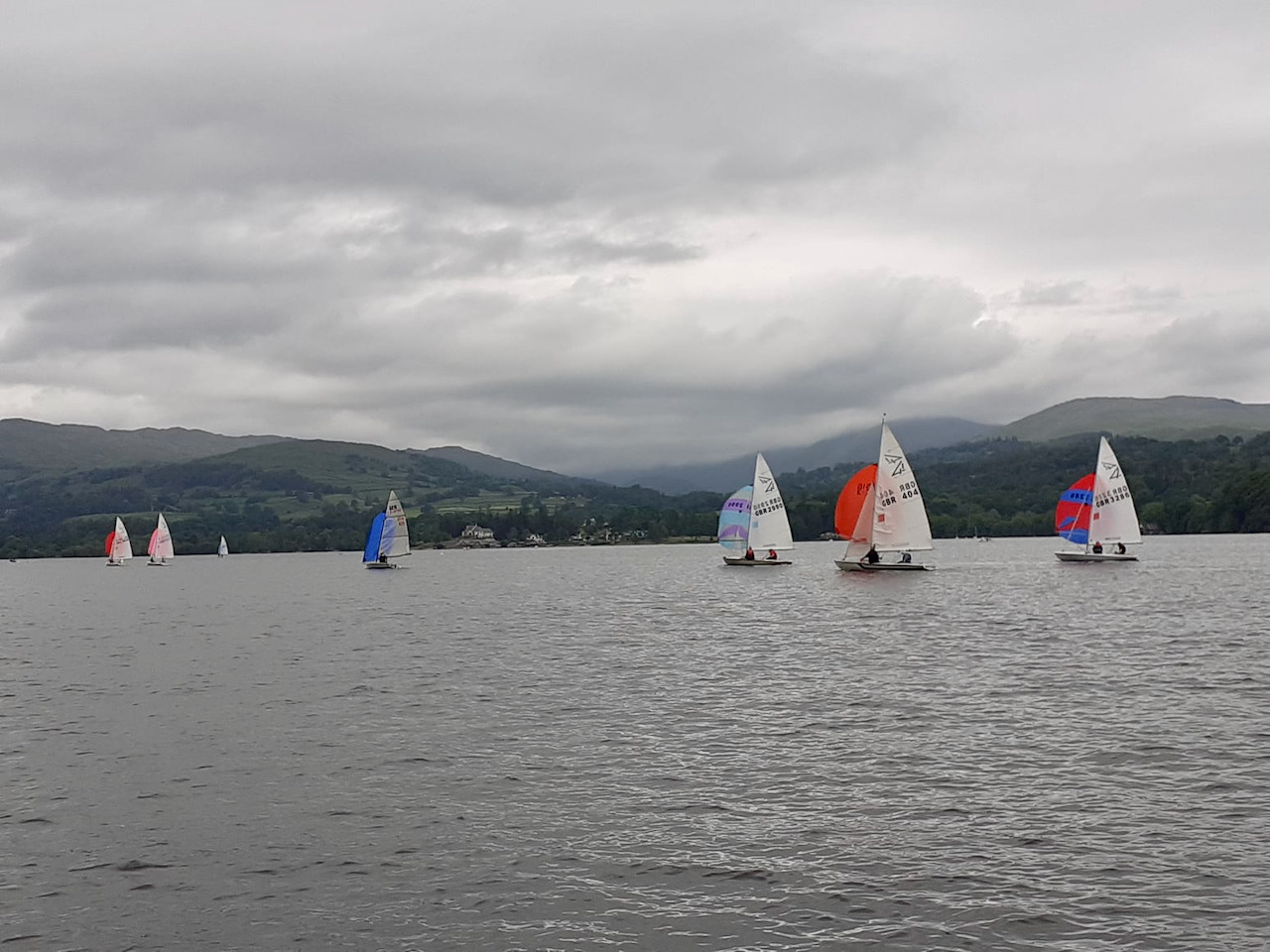 2021 is the 60th anniversary year of South Windermere Sailing Club, and June 13th was the 55th year of the running of the Waterhead race a long distance race from Fell Foot at the south end of Lake Windermere all the way to the Waterhead buoy off Ambleside in the north, and back. The race includes racing through crowded Bowness Bay with its many ferries and tourist hire boats, and crossing the path of the chain ferry at Ferry Nab, all the while taking on the challenge of the unpredictable winds coming off the hills and mountains surrounding Englands largest natural lake.

This year the wind was mostly a patchy F1 from the south west, with patches also coming from the East, West and South as usual. It was going to be a contest of patience, concentration, and keeping in the breeze. 15 dinghies and 1 cruiser took part and all made it home within the time limit

After a short beat to the windward mark, Mark Fearnley rounded first in his Blaze, closely followed by Eddie Waring and Mike Deane in the K6, then John Thornley and Christian Barnes leading the good fleet of FF15's. On the long, long, long run, the key was keeping it in the pressure, which Eddie and Mike, John and Christian, along with James and Jude Downes (in another FF15) and Bob Eastwood in his Vareo all did to fine effect, hardly even slowing through Bowness Bay. At a guess it was probably Bob leading on handicap at Bowness. Going up the north lake John and Christian kept in touch with the speedy K6, and squeezed past at the waterhead buoy as the K6 had kite dropping issues. James and Jude were 3rd round, and then quite a long distance behind at this stage - probably about 10 minutes were the next group of boats including Fearnley in the Blaze, and John Bentham and Phil Bissell in another FF15. At the halfway stage is looked like it was a close run thing on handicap between John and Christian in the FF15, and Bob's Vareo.

The great thing about racing on Windermere is there is always the chance to catch up, especially if the leaders run out of wind. On seeing the leaders on the east side of the north lake run into light patches, Fearnley in the Blaze swapped over to the west shore (where of course it is said it never pays), and managed to keep joining the patches of wind together to quickly catch up the leaders, passing James and Jude in the entrance to Bowness Bay. After a bit of crossing tacks with John and Christian, the Blaze hooked onto a good lift and was suddenly 100 yards ahead just before passing Storrs Temple.

With the wind now up to F2 the Blaze was able to gradually extend from the FF15's, but had no chance of catching the K6, which finished in 4 hours and 49 minutes. The Blaze was 7 minutes behind, and the leading FF15 (now James and Jude who had played the shifts to get past John and Christian) finished a further 9 minutes later. The wind then started to drop, and the last competitor took well over 6 hours to finish.

19.2 nautical miles on the GPS. A true marathon and test of concentration, stamina, and most of all bladder control.

For the results, see Waterhead Race