Before SWSC: My First Waterhead 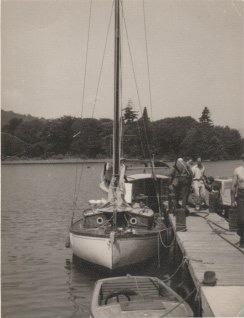 I was one of four engineering apprentices who hired Myosotis - a 30 foot ex broads yacht from Holidays Afloat at Bowness in June 1960. Dave 1 managed to convince the owner that he knew all about boats as he worked part time on Fairhaven lake. He failed to mention that this was in the cash office, but two of us were Merchant Navy apprentices. I think that this helped.

After a short lesson which mainly consisted of how to operate the Baby Blake sea toilet, we set off towards Ambleside towing a 16ft rowing boat. All went well until we came to an abrupt halt having run aground. This came as a bit of a shock. Our instructor said that it would sail on wet grass with only a 3ft draft. With the help of several swimmers and with the 3 tallest crew members in the water, the boat was turned round. We sailed back down to the then small jetty at Low Wood, managing to come alongside without using the Seagull engine. We did not use the engine all week as it was considered cheating. We towed the yacht when the wind dropped or when trying to pick up one of Holidays Afloat's moorings. These were at Waterhead, the back of Belle isle and Lakeside. We could also use the base jetties.

One of the problems was that the dinghy would try to ram the yacht when we slowed down. Dave 2 was put in charge of the rowing boat and cooking, as the Yacht knew when he was on the helm and misbehaved.

There was another hired yacht on the jetty and after a few drinks with them in the Low Wood tap room we agreed to a race up and down the lake. We arranged to all have a few days practice and meet later in the week. One day there was no wind so we had a race around the lake on our motorbikes.

We spent most of the week in company with the other yacht, and the night before the Waterhead was spent at Low Wood. Playing Darts in the tap room one of the hotel staff asked if we liked turkey? "Meet me round the back," he said. The whole cooked turkey cost us half a crown and came wrapped in a tea towel.

The race was in light winds and neither boat managed the full course. Sounds familiar over 60 years later.

This holiday was before SWSC was founded. We had just as much fun with the rowing boat as the yacht. I have lost touch with two of the crew but Andrew was best man at my wedding . He sailed mainly GP 14s at Burwain and became Commodore. With his wife he spent 17 years cruising the Med and I was fortunate to spend three memorable trips with them.

So this was the start of a lifetime of enjoying being on the water and my first Waterhead.